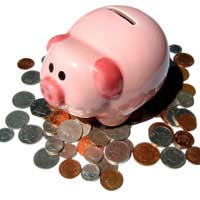 When money is very tight, necessity can call for extreme measures so that savings can be made. Many dedicated frugal people have come up with some creative ways to shave pounds off their budget.

We round up some of the best and the most unusual money saving tips.

Haggling is common in certain situations, for example at auctions or markets. However some extreme money savers are so keen to make savings that they will haggle in large chain stores or even the supermarket! There have been mixed reviews about the success rate, but it has worked for some.

Many would turn their noses up at the idea but one fairly common money saving tip is to keep an eye out for loose change, as it all adds up. Particularly crafty money savers often set their kids to looking for loose change as a game.

The first place to look for loose money is down the back of the sofa, but dedicated budget watchers will look anywhere. Particularly successful places are reported to be vending machines and games arcades. The odd few have even been known to make use of a metal detector in the search of dropped pennies.

Following on from the idea of collecting loose money is saving up change in jars or a piggy bank. Saving money like this is not a revolutionary idea by any means but many think it’s a bit pointless or embarrassing.

However, change savers can attest to the fact that the money does add up and after a few weeks or months you could probably boost your grocery shopping budget or get yourself a treat with the money you have saved.

Some people have expensive tastes, or at least think they do… Alongside this some see economising as somehow embarrassing or shameful. Hardened money savers are not to be deterred though! We have heard reports of stroppy teenage girls who insist on the best (and most expensive!) brand of shampoo. Crafty mothers just keep refilling the posh bottle with inexpensive shampoo and the daughter is none the wiser.

Similarly, we’ve heard of cheap coffee filling an inexpensive jar and the coffee connoisseur happily drinking their coffee without suspicion.

Some of these extreme money saving tips could be seen as a little morally dubious at best, but some people do them anyway.

The most common victim of budget borrowing seems to be the workplace where staff seemingly help themselves to stationery and loo roll most often.

A surprising amount of people also report routinely taking items such as soap from hotels and sugar, milk, salt and pepper sachets from cafes.

Others don’t really steal – more take advantage of the facilities. A typical example is hardcore moneysavers making an effort to only shower at work or the gym, saving money on their own water at home.

Waste not want not

Hardcore money savers tend to make sure that nothing goes to waste. We heard one report of creative thrift when someone made soup from potato peelings and a few other odds and sods. The soup’s tastiness was never confirmed or denied!