Home > Food and Drink > Cooking on a Budget: One Pot Cooking

Cooking on a Budget: One Pot Cooking 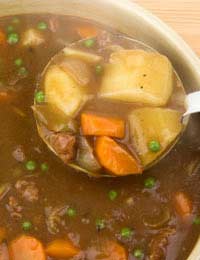 If you’re looking to save a pounds during your weekly food shop, planning some ‘one pot’ meals is definitely the way to go. One pot cooking is great for many reasons, not least because you can produce some cheap, versatile and tasty dishes – and save on the washing up!

One-pot dishes can basically be divided into three main groups – soups, stews (or ragouts) and risottos. Throughout history, both the rich and the poor have enjoyed these types of dishes, with the first one pot cooking methods thought to have emerged as far back as prehistoric times. What these prehistoric meals and their modern counterparts have in common is the fact that typically, one-pot meals are relatively fast to prepare, but need time to simmer thoroughly before serving.

Depending on the food and seasoning available, there have been a whole host of regional variations of each dish produced. For instance, where one person used pearl barley as ‘filler’ in their dish, someone else may have chosen to opt for oatmeal or pulses instead. Luckily, these days we are spoiled for choice when it comes to ingredients, making the range of one pot cooking recipes almost endless.

Tips For One Pot Cooking Success

The secret to any tasty one-pot soup or stew is to get the broth or stock right. Marigold is often cited as one of the best vegetable stocks to use as a basis for soups and stews. However, if you’re keen on being as frugal as possible, using leftover meat and bones from previous fish or meat suppers will supply you with a free stock for your next meal.

Most one pot cooking dishes also centre around fish or meat, bulked out with vegetables such as potatoes, leeks, carrots and other root vegetables. Cheaper cuts of meat such as silverside beef are often overlooked. Mutton is also another underrated meat that costs less, but tastes great. If simmered gently over a low heat for an hour or so, these cheaper cuts of meat can be just tender and appetising as the more popular, but more expensive options. The trick is to keep the heat low – this allows the meat or fish to slowly tenderise without turning tough or rubbery in texture. Simmering your one-pot dishes will also allow the flavours and seasoning to emerge and mature during the cooking process.

Go Vegetarian At Least Once a Week

You can make your one pot dish budget extend even further by opting for a completely vegetarian dish. Vegetables bought in season, especially if purchased locally, will often save you even more money. Pulses such as chickpeas, borlotti or kidney beans are extremely economical, and insert additional texture, flavour and nutrition into many one-pot meals. You can add extra interest and variety to your dishes by experimenting with seasoning and spices.

Also bear in mind that the point at which you add your ingredients can make all the difference to the final flavour of the dish. For instance, adding lemon or garlic flavours at the beginning usually takes on a much more subtle and mellow flavour. But add it near the to the end of the cooking session, and the flavour will be much more zesty or strong. One pot cooking is so easy, yet the possibilities and subtleties of using a wide variety of ingredients can positively turn it into a culinary art form.

Smart Shopping: All About Food Co-ops

How to Make Your Fruit Go Further

Food Waste: Low Budget Living in 'The Times'
Share Your Story, Join the Discussion or Seek Advice..
The beef mince stew costs £3.50 without compromising quality. Serves 4-5.If you cut out some of the veg it's cheaper but for full nutrition it's better to keep it as it is. The chilli, ginger and cinnamon make it taste sweet and full flavoured but not spicy and the cumin tones it down.You can add red kidney beans for 36p enough for 6 meals.
anakaday - 18-Apr-12 @ 1:43 AM
A good beef mince stew does not have to be a cheap tasting bolgnese.Get some good vegetables and the right herbs and spices and you can create a restaurant quality meal.Try the following (Sainsbury's)Irish beef mince (400g) £1.25 (tastes as good as the expensive mince)2 onionsLarge carrot small Courgette Medium red & green pepper ( basics peppers)Mushrooms 1/3 pack chopped tomatoes Tomato puree (1/3 tube) Seasoning;2 teaspoons majoram2 teaspoons cinammon2 teaspoons paprika1 teaspoon salt1 teaspoon coarse black pepper1 teaspoon garlic granules1/2 teaspoon ginger1/2 teaspoon cumin1/2 teaspoon chilli powderFry onions add garlic granules, add seasoning fry the meat for 2 minutes , add remaining chopped vegetables and stir until meat is brown and vegetables are covered in seasoning. Add the chopped tomatoes. Dilute the puree in a glass of water. Add approximately two glasses of water. Simmer until water has evaporated leaving a thick sauce.
anakaday - 18-Apr-12 @ 1:34 AM
Title:
(never shown)
Firstname:
(never shown)
Surname:
(never shown)
Email:
(never shown)
Nickname:
(shown)
Comment:
Validate: